June 5TH, Mount Kinablu ─ A year after the earth shook Mt.Kinabalu with a 6.9 magnitude earthquake, a group of climbers scaled the mountain as a tribute to the 18 lives lost in last year’s tragedy.

A memorial was held on Laban Rata helipad, where climbers gathered for a prayer and to lay down flowers in respect of those who perished. 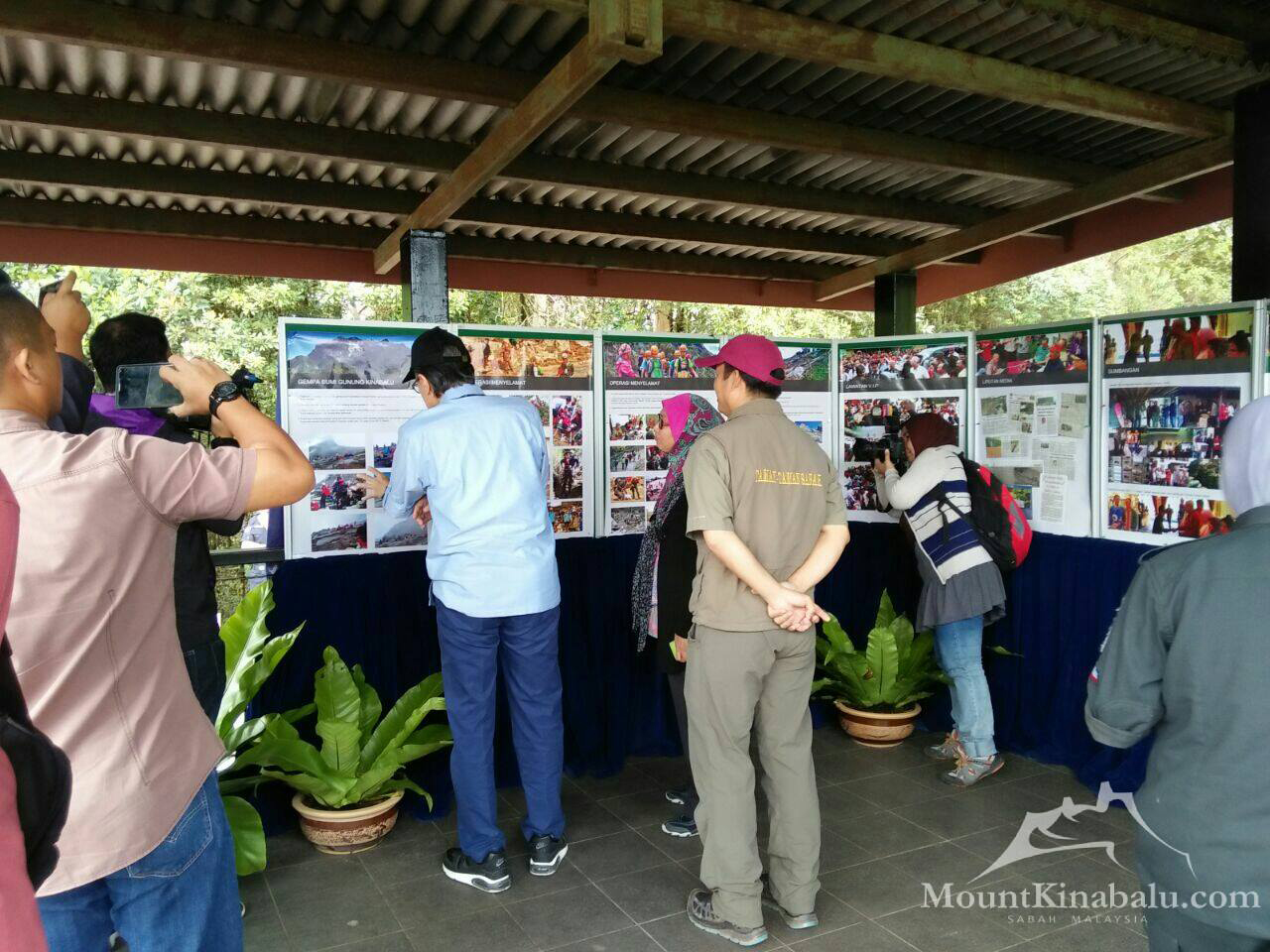 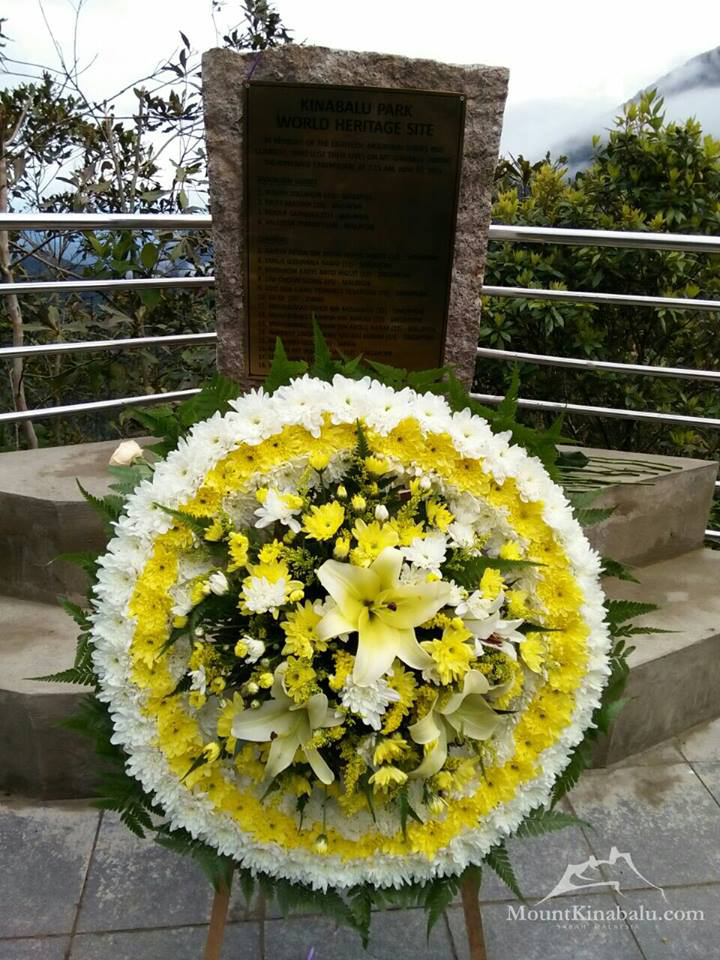 Over at Kiau Viewpoint, Sabah Parks unveiled a monument during the solemn memorial to mark the one year anniversary since the Earthquake struck. The monument mounted on a slab of granite made from a boulder that chipped off mount kinabalu during the quake, is etched with the names of those who perished. The ceremony was led by Tourism, Culture and Environment Minister Datuk Masidi Manjun, starting off with a one minute silent prayer for the quake victims followed by the laying of flowers at the monument.

Masidi also said the monument was symbolic and reflects the people’s sorrow over the tragedy and serves as reminder that the safety aspects in mountain climbing must be continuously improved.

A tree-planting initiative was also led by the minister at the memorial site in memory of the four mountain guides who died during the quake.

KOTA KINABALU: One of the two new trekking routes to reach the summit of Mount Kinabalu from Laban Rata is now ready for use, Tourism, Culture and Environment Minister Datuk Masidi Manjun announced yesterday. 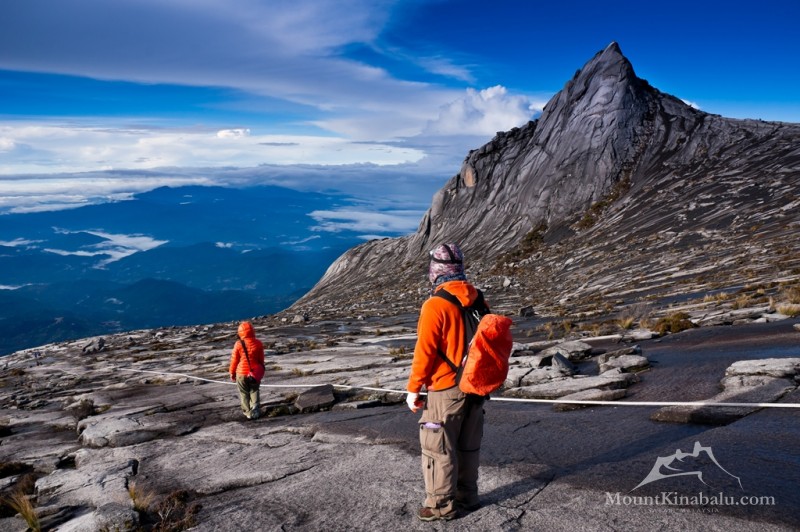 He said alternative routes which would replace the old single trail leading to the peak, where several climbers and mountain guides were killed during an earthquake in June, would enable Sabah Parks to fully reopen the mountain to climbers by Dec 1 as planned.

“To meet our plan to reopen the mountain by December, we will use one of the two trails first, which is the Ranau Trail. I am very happy with the works that have been done on the trails, which were carried out professionally with the assistance from the American, Canadian and Japanese consultants.

“The construction of the trails was carried out by the mountain guides, porters and local villagers themselves. They are the most suitable candidates for the job as they are the ones who know best the needs and challenges faced by the climbers,” he told reporters after launching Google Maps Street View imagery of Sabah’s local attractions.

Masidi informed that the other trail, named “Kota Belud”, was still being constructed and would open to climbers once fully completed.

However, he said there was no confirmed completion date yet for the trail, which would offer climbers a more scenic view from the face of the mountain facing the Kota Belud district.

“I can describe both trails as ‘beautifully challenging’ and visitors who appreciate nature and its beauty will find the experience of trekking these trails very enjoyable.

“We avoid the old trail, which was badly damaged during the earthquake. So, now climbers will ascend to the peak from the two new trails, one is located east of the old trails and the other is to the west. Booth trails will meet at Sayat Sayat,” he said.

Asked if the new trails were more challenging, he said no special climbing skills were needed for the new routes as they were not that much different from the previous trail in terms of difficulties.

He added that anyone with reasonably good health and fitness could still climb all the way to the peak of Mount Kinabalu just like before.

He also informed that despite two news routes were now available from Laban Rata, compared to only one previously, Sabah Parks had decided to maintain the number of visitors allowed to ascend to the summit daily at 192.

On the trail from Mesilau to Laban Rata, which was damaged much more severely by the earthquake as compared to the Timpohon trail, he said the route would remain closed for now and that no decision had been made yet as to whether it would be repaired and reopened.

The mountain was closed to all climbers after a 6.0 magnitude tremor disconnected climbing trails and killed 18 people on June 5.

The World Site Heritage was partially reopened on Sept 1, with climbers allowed to climb up to Laban Rata via Timpohon.

However, discouraged by the fact that the summit was still off limit, less than 100 visitors climbed the mountain that month. SOURCE: THE BORNEO POST

Two months following the magnitude 5.9 earthquake that hit Sabah in the Ranau epicenter on June 5, which destroyed parts of the Timpohon trail, leading up to the Mount Kinabalu summit; Mount Kinabalu is finally reopened for a ‘trail test’.88 climbers will be making their way up Mount Kinabalu this Saturday starting at 8am, markinh the ‘soft opening’ of a new and improved route to replace the previous trails. The climbing group comprises mainly of Sabah Parks staff, mountain rangers, mountain guides and members of the media.According to state Tourism, Culture & Environment Minister, Datuk Seri Masidi Manjun, the experimental climb will take climbers from the base of Timpohon Gate to Laban Rata around KM 6 or 3,272m of the 4,095m mountain. He also noted that most of the previous trail was retained, apart from certain parts that were damaged by the earthquake.

“We have repaired the damaged routes and built new paths were necessary. This may not be the final trail but whatever we end up with will likely be more challenging that the previous route,” said Masidi.

Masidi is optimistic that the alternative route would be safe for climbers, although upon it’s reopening, climbing size would have to be limited to fewer than 100 pax per day–about half of its previous capacity.

Sabah Parks director, Dr Jamili Nais said that the new path that will be opened to climbers is a day-climb with a cut off-time of 2pm. The rest of the trail, from Laban Rata to the summit, is still under review and will not be open till all safety measures are met.

According to Dr Jamili, Sabah Parks have engaged the expertise of mountain experts from Canada, Italy, Spain and Japan to recommend the necessary action. Sabah Parks will then be collating their reports and take on their recommendations before deciding the next step.

Dr Jamili said that they have already received many enquiries with people interested to climb the mountain as soon as possible. However, they have not decided on when the summit climb will be reopened. 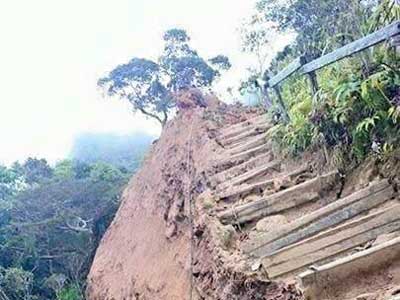 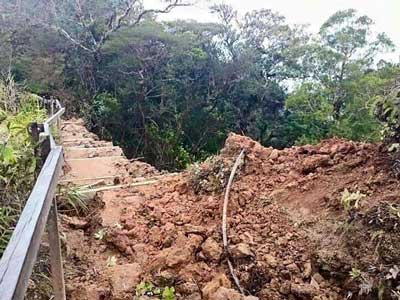 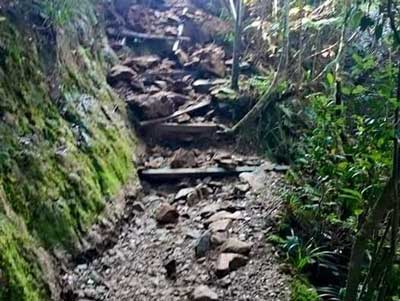 Search and rescue operations for victims of the earthquake have been completed. Now plans are being made to rebuild and restore the trail which had collapsed and disappeared due to the disaster.

The Sabah Minister of Tourism, Culture & Environment has announced that mountain climbing activities will be suspended for three weeks for this purpose.

All tourism activities in Sabah other than the mountain climbing are operating and open to visitors, including Poring Hot Springs located 38km from National Park.

We received this message from one of the guests, Jasmine who climbed Mount Kinabalu in September 2014, here is what she had to say:

“In September 2014 I had the privilege of climbing Mount Kinabalu with your tour company. Binker Sapinggi was my guide.

Here is a photo that I took with Binker at Laban Rata and a funny photo that I took of Binker and one of the other guides on the way down from the summit. Based on what I read in the news, I believe Binker is the younger brother of Robbi Sapinggi who passed away during the earthquake.

Please offer sincere condolences to Binker on my behalf. Thank you for looking after the guides, porters and their families through the crowd funding pages. I have donated and shared the links, and hope that all of our contributions will help the affected people during this difficult time.

I hope to visit Mount Kinabalu and these wonderful people again some day. Best wishes from Jasmine.”

Thanks for your kind wishes, Jasmine 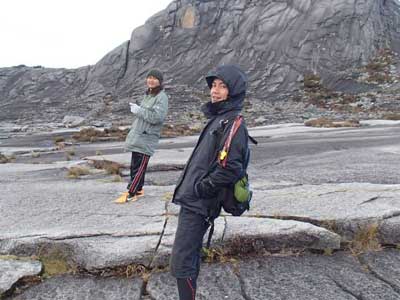 In light of the current situation and ongoing rescue operations, kindly be informed that Mount Kinabalu trail is closed for ALL climbing till further notice. We thank you for your kind understanding and do watch this space for latest updates.